يا أيها الذين آمنوا كتب عليكم الصيام كما كتب على
الذين من قبلكم لعلكم تتقون
O ye who believe! Fasting is prescribed to you as it was prescribed to those before you, that ye may (learn) self-restraint, – [Quran 2:183]


مَنْ قَامَ رَمَضَانَ إِيمَانًا وَاحْتِسَابًا غُفِرَ لَهُ مَا تَقَدَّمَ مِنْ ذَنْبِهِ
"... whoever does qiyamul lail (night prayer) during Ramadan out of sincere faith and hoping to attain Allah's rewards, then all his past sins will be forgiven." (Sahih Al-Bukhari).
"Fasting is a shield with which a servant protects himself from the Fire." [Ahmad, Saheeh]
Ramadhan is coming soon, the most percious time for us. Lets clean our heart (ikhlas) to welcome and fill this blessing month with good deeds, amal shaleh.

This is the month that Allah multiplies our good deeds, forgives us and blesses us.

Email ThisBlogThis!Share to TwitterShare to FacebookShare to Pinterest
Labels: Tausiyah

Remember, Many Cases of Sudden Death These Days!

The phenomenon of sudden death has been frequently we are witnessing at present. Previously healthy people, with normal-like activity, or even sports soccer, or any type of sport activities-suddenly he fell and died. According to United Nations (UN) data, every year many people die from strokes and heart attacks. Even mentioned that heart disease ranks first of many causes of death at this time.
This video below is one example, that sudden death may come at anytime.


Yusuf al-Sa'ah Asyratus Wabil in his book mentions that the number of sudden deaths is one of the signs of qiyamah nearby. It is based on several news hadith of the Prophet sallallaahu 'alaihi wasallam. One hadith;
إن من أمارات الساعة  . . . أن يظهر موت الفجأة
"One of the basic signs of qiyamah is near... Will be a lot of sudden death." (Narrated by Tabaraani and classed as saheeh by al-Albani in Saheeh al-Jami 'al-Sagheer no. 5899)
Surely death is a mystery to humans. No one knows when it comes. But onething certainty that the end (time of death) a person has been recorded in advance in Lawh Mahfouz before humans were created. And when someone has come death, then you can not ask for a moment or postponed. Allah Ta'ala says,
فإذا جاء أجلهم لا يستأخرون ساعة ولا يستقدمون
"When  the death comes, they can not postpone it  and  neither enhance it. " (Surah al-A'raf: 34)
After the death of the charitable opportunities have been exhausted. Humans will get a reply from the deeds, his deeds in the grave, in the form of favors or adzab grave. And when it happens Resurrection, he will be resurrected and held accountable by God for all the deeds he had done in the world.
"If anyone cautious and make repairs, there is no fear come upon them and not (also) they grieve." (QS.Al-A 'raf: 35)
While those who disbelieve and deny the truths of Islam, "And those who deny Our revelations and brag about it, they were the dwellers of Hell to dwell therein." (QS.Al-A 'raf: 36)
Let us take a lesson from this phenomenon, prepare to welcome the call of Allah, to do HIS commands and stay away from all of HIS ban. Waallahua'lam.

Source: voa islam, you tube
Posted by Hamba Allah at 10:32 AM No comments:

NASA confirms: possibility of Sun rising from the west 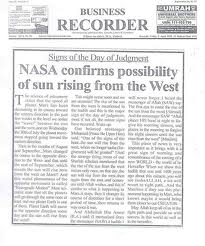 ARTICLE (April 09 2010): The science of astronomy states that the speed of planet Mars has been decreasing in its course toward the eastern direction in the past few weeks to the level we notice the “waver” between the east and the west and on Wednesday the 30th of July the planet movement stopped going toward the eastern direction.
Then in the months of August and September… Mars changed its course in the opposite direction to the West- and that until the end of September which means the sun will rise now from the west on Mars!! And this weird phenomena of the opposite movement is called “Retrograde Motion” Most scientist state that all the planets will go through the same once at least and our planet Earth is one of them. Planet Earth will move in the opposite direction some day and the sun will rise from the west!!
This might occur soon and we are unaware! The rise of the sun from the west is mentioned in the hadith and this is the major sign of the day of judgement, most if not all, the minor signs have occurred. Wake up. Our beloved messenger Mohamed (Peace Be Upon Him) said: “One of the signs of the hour the sun will rise from the west, where no longer tauba (forgiveness) will be granted”!!
And the strange thing most of our Shariah scholars mentioned that the rise of the sun from the west occurs only once on that day the sun will rise from the west then again from the east and continues until Allah wishes and this is similar to what is happening to Mars it stops, then it changes its course of direction for a short period of time then returns to way once it was.
And Abdullah Bin Amro (R.A.) said: (I memorised from the messenger (SAW) a hadith I will never forget I heard the messenger of Allah (SAW) say: The first aya to come the rise of the sun from the west) [Ahmad]. And the messenger SAW “Allah places HIS hand at night to forgive his morning sinners, and places in the morning to forgive his night sinners until the sun rises from the west” [Muslim].
Posted by Hamba Allah at 1:31 AM 1 comment: