Is it true that Shape the Universe Like the trumpet will be blown For Trumpets When Doomsday? 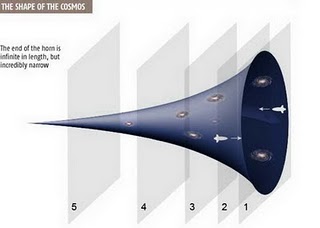 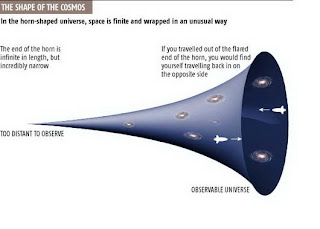 Shape of the UniverseIn the book Tanbihul Ghofilin Volume 1 thing. 60 there is a long hadith that tells of events that end at the beginning is very interesting to observe.From Abu Hurairah ra, Rasulullah SAW said:

"When God finished the heavens and the earth, God made the trumpet (trumpet) and handed over to the angel Isrofil, then he put it in its mouth, looking forward to the Throne, when did he ruled.

I asked: "O Messenger of whether the trumpet's that?"

Rasulullah replied: "Very large bulatannya, for the sake of God who sent me as a prophet, it bulatannya large area of ​​sky and earth, and will be blown up to three times. First: Nafkhatul faza '(for scary). Second: Nafkhatus sa'aq (to kill). Third: Nafkhatul ba'ats (to revive or awaken). "
In the above mentioned hadith that Isrofil angel trumpet or horn is shaped like a horn and made of light. Size bulatannya area of ​​sky and earth. Shape like a trumpet horn reminiscent of the ancient people made of horn.Sentence area of ​​the heavens and the earth can be understood as a measure that includes / covers the entire area of ​​the sky (as a natural symbol of unreality / GHOIB) and earth (as a natural symbol of real / Shahadah). Or in other words, angel trumpet Isrofil spheres that circle stretching from the real nature until nature GHOIB.If keshohihan hadith above can be proved and the data obtained by WMAP can be accounted for accurately and then we can be sure that we are like a butterfly that lives in the midst of the most active caldera volcano ready to erupt at any time.And God has told us of the awesomeness that Isrofil angel trumpet An Naml verse in sura 87:

"And on the day when the trumpet in the inflatable, then troubled, all in the heavens and everything on earth except those who are in want of God. And they all come face to humble themselves. "
The creature let alone the sky just may be surprised that in fact the earth's creatures are much weaker and smaller. In the above hadith connection there is a little preview of what kind of creatures of the earth shock and fear the future."At tergoncangnya earth, like a drunk man so that mothers containing fall implies, that breastfeeding forget the baby, the children so changed and the demons running around."There is an intriguing question, if the trumpet just for that, then of what the peniupnya and more dashsyat again, what about her Creator? Allahu Akbar! La Illaha il Allah !!
Posted by Hamba Allah at 10:03 AM 2 comments:

Is It True That The Dajjal Has Appeared?